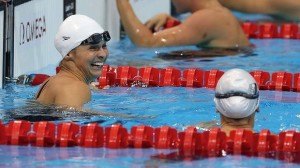 One of the richest swim contests in the country takes place in Western Australia in February 2014 with swimmers vying for a chance to win their share of the high prize money.

Registrations have opened for BHP Billiton’s Aquatic Super Series, which features swimming and water polo competitions and a mass open water race across the river where up to 500 people will battle for a share of more than $100,000.

For two days on Friday January 31 and Saturday February 1, the Australian Swim Team will take on their Chinese, Japanese, Brazilan and South African counterparts at Challenge Stadium.

Western Australia’s BHP Billiton Aquatic Super Series has received a major boost in only its second year with the inclusion of strong swimming nations Japan and Brazil in the pool competition.

“Together, those teams boast numerous Olympic and World Championship medallists, so the competition is certain to be fierce,” said Harvey.

In the leadup, sporting legends, including Michael Klim, Libby Trickett, Leisel Jones and Matt Welsh are visiting regional towns across the state to host free swimming and water polo clinics to promote the event.