Marathon swimmer Diana Nyad is at it again – this time however in a pool in New York. 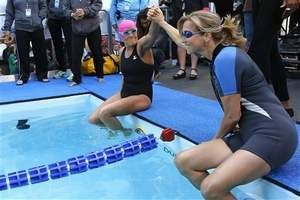 Nyad is swimming a 48 hour marathon in a pool in Manhattan to benefit victims of Superstorm Sandy.

Her swim begun with diving in to the pool on Tuesday morning – beginning her 48 hour endeavour.

This current swim follows her recent swim from Cuba to Florida which raised speculation whether she was assisted in some way during the crossing.

Nyad expects the Manhattan swim to be far more fun than her feat in the ocean, which she expected to be “much more unforgiving” than two days of urban pool laps. After this, she said she’s looking to more “personal, creative” charity events using the portable pool — possibly to raise money for victims of tornadoes, tsunamis, terrorist attacks and other disasters.

Regardless of any controversy or speculation, Diana Nyad is truly a champion … and deserves credit and admiration for her achievements to date.