It’s terrific to see another channel challenge – and especially when it’s being done to raise funds for a deserving charity. This time, the crossing is being attempted by a team of six swimmers who aim to swim the 22 mile crossing in hourly turns.

The following article is courtesy of www.thestar.co.uk 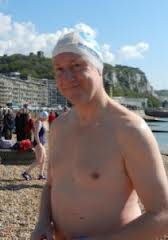 A SWIMMER from Sheffield is making an almighty splash to raise funds for Diabetes UK.

Mike Garnock-Jones, aged 53, is part of a team of six attempting to swim the English Channel later this week.

The education worker was inspired to take part in the challenge after his father-in-law was diagnosed with Type 2 diabetes last year.

Mike said: “It was at my wife’s birthday party that we noticed that my father-in-law looked very gaunt and ill.

“He had lost a dramatic amount of weight, had tingling in his legs, urinary problems and fatigue.

“I have also seen from working in schools, and from my children’s friends, that adolescents with Type 1 diabetes need all the support they can get in order to manage their condition well.

“That’s why I would like to do as much as I can for people with diabetes, by combining my swimming hobby with fundraising for Diabetes UK.”

Mike, who has completed open water training swims in Dover, North Wales and Warrington, will take it in turns with his five team mates to swim, an hour at a time, across the 22-mile channel.

His team, The Petroleum Jellies, will be swimming at some point in the seven days after Friday – depending on weather and tides.

The whole crossing will take around 15 hours, with swimmers only allowed to wear swimming costume, cap and goggles, but no wetsuits.

Mike said: “The Petroleum Jellies are getting to know each other well and we will need support from each other tackling the challenge.

“I am getting used to the cold now, but the prolonged shivering after training was the worst.

“I am especially proud that three of my team mates with diabetes are taking part.”

He added: “I’m always looking for a new swimming challenge.

“Last year, my wife and I competed in an open water race in Amityville, USA to raise money for another diabetes charity.

“When I saw that Diabetes UK was offering the opportunity to join a relay team and swim the Channel I leapt at the chance to take part.”

Mike is aiming raise at least £1,500. To help him reach his target and support diabetes sufferers, visit www.justgiving.com/mikegarnockjones

Of course we wish Mike and his team, the Petroleum Jellies every success in their swim challenge of the Channel, and anyone wishing to contribute to the cause can donate and support diabetes sufferers at www.justgiving.com/mikegarnockjones