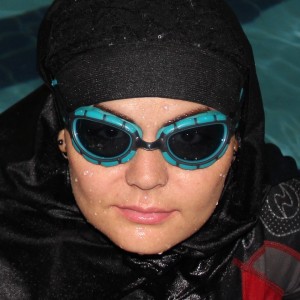 An incident has occurred where an Iranian woman was denied the recognition of achievement for an open water swim of 20 kilometres – simply because she was a woman!

But this courageous lady is fighting back to receive the recognition she deserves!

Following is an excerpt of an article posted on www.policymic.com

In June 2013, Iranian swimmer Elham Asghari was denied the recognition of her record for 20-kilometer open water swimming in the Caspian Sea. The officials at the Ministry of Sports explained that her costume did not match the standards prescribed by Sharia law. In the absence of a set standard for what qualifies as Islamic compliance, the denial to register Elham’s record is not only arbitrary, but grossly unfair. Unfair to a woman who swims in a three-kilogram full-body suit and a headscarf to avoid precisely this sort of discrimination.

In Iran, women are mandated to cover their bodies and heads at all time, prohibited from entering stadiums, and allowed to compete only in “women only” events. Women are also banned from entering in swimming competitions. This is presumably in accordance with Islam, or rather ‘Islamic-ness.’ Elham Asgheri not only chose an unconventional hobby in competitive swimming, but tried to pursue it without overstepping any Sharia lines. She once suffered injuries from propellers of a police boat trying to stop her from swimming.

For the swim in question, Elham took the precaution of swimming in a beach reserved for women, while swimming fully covered. Along with adding drag and weighing six pounds, the suit hurt her physically and compromised her efficiency. After overcoming the physical challenges and setting a new record, she was rewarded by the Ministry of Sport and the Iranian Swimming Federation refusing to register her record. The grounds for refusal were that, irrespective of whether her suit was Islamic or not, registering her record itself would be contrary to Sharia and Islam, because “the feminine characteristics of her body were visible when she came out of the water.”

Elham Asghari has sent a message out to all her supporters .. view it below:

If you feel you would like to support Elham in her quest for recognition of her achievement in completing her 20 kilometre open water swimming feat – but is being blocked because she is a woman .. support her and add your name to her petition.