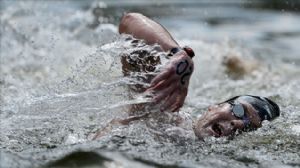 January 11, Perth, Australia. An American Open Water Swimmer Alex Meyer who was a participant last summer in the Olympic marathon swim in London, is ready to race with some of the Oceania’s best open water swimmers for a 10-kilometer race that has a prize of US15,000 to both male and female division winners.

The January 20 race in Swan River will mark not only Meyer’s first major competition since the Olympics, but the first major open water race offered internationally since the end of the FINA 10K World Cup in October. Meyer will be tested throughout the swim, with a strong field of strong open water racers scheduled to attend, including Trent Grimsey, who recently broke the world record for a single crossing of the English Channel and will view this as an all-out sprint compared to the 34-kilometer stretch of the English Channel. Kane Radford, the two-time reigning champ of the RCP Tiburon Mile, is also scheduled to race, as is Olympic 1500 freestyle competitor Jarrod Poort.

The women’s 10K race will be highlighted by the appearance of Aussie Melissa Gorman. Gorman won the women’s RCP Tiburon Mile in September and was 11th in the Olympic 10K after leading for the opening half. She is a world champion in the 5K, and as she has done in previous open water swims, could compete with the men time-wise.

The $15,000 cash prize appears to be the largest sum offered anywhere in the world to the winner of a single open water race, ahead of the $10,000 offered to the winners of the Tiburon Mile. It is worth noting, though, that the Tiburon Mile offers more value in terms of money paid per kilometer — $6,667 as opposed to the $1,500 in the Perth race. The Perth race top prize is also $5,000 shy of FINA’s payout to the overall winner of the 10K World Cup, which consists of eight races. Nonetheless, the event has attracted one of the United States’ biggest open water stars, and a host of top swimmers from the Oceania region. A total of $100,000 will be awarded to winners of races ranging from 500 meters to 10 kilometers.

Here in Open Water Swimming Mastery we encourage everyone who wants to venture in this world to be motivated and inspired. It’s good to know these kinds of updates to let your desires be fueled some more.