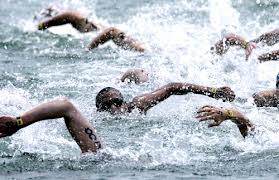 This week coaches and administrators from all over the world will be arriving in Southern California to be part of the 2012 Global Open Water Swimming Conference to be held from Sept. 21-22 back to back with the Swim Across America event at Marine Stadium on Sept 23, Sunday.

The Swim Across America event will be streamed live online, but there will be plenty of additional highlights over this three-day extravaganza.

The keynote speeches for the Conference will be electrifying with a pair of charismatic individuals: Diana Nyad and Craig Dietz. On the Queen Mary, Nyad will talk about her swim attempts from Cuba where she will show incredible footage of a 63-year-old woman attempting to overcome squalls and box jellyfish, the most venomous creatures on the planet. She will be joined Craig Dietz, an indescribably courageous athlete who was born without arms and legs.

Craig is an attorney, drives a car, and is married. The Pennsylvania native will follow-up his presentation by entering the Swim Across America event in Marine Stadium. Both Nyad and Dietz will describe living without limitations and will generate everything from laughter to tears during their speeches.

Truly this will be an epic event that most open water swimming lovers will never forget. Also, an inspiration for everyone.