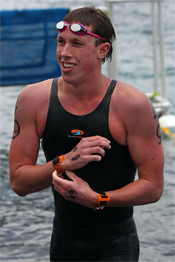 The 10km event, which doubles as the Oceania championship, saw Radford swim comfortably within the group before breaking into the lead around the 9km mark. He was able to hold the lead from Japan’s Yusanari Hirai (who trains with Radford in Perth) and Ridge Grimsey of Australia.  The second and third Kiwis in the national title race were Phillip Ryan and Troy Balvert.

The 23-year-old Radford, who returned from his training base in Western Australia for the event, said the race went more or less to plan.

“I was a little bit cold in the first lap so I decided to go out a little bit in the second lap and try and keep warm by picking up the speed for the boys a bit,” he said.

“It ended up working out well to come out with the win, which was the main goal out there.”

“The results indicate Radford’s recent move to train in western Australia with team Uniswim has been good for him. Radford will be gearing up for the FINA world cup series and setting his sight on gaining more international experience with hopes of representing New Zealand at the Pan Pacific championship in August.” 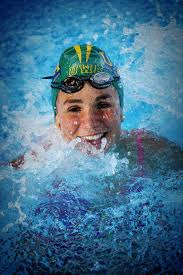 Australia’s Sacha Downing, who trains with Radford in Perth dominated the women’s race and came home in 2:07.04 to beat South Africa’s Sasha-Lee Nordengen by nearly a minute.

Ashburton 17-year-old Grace Somerville produced an outstanding effort to finish only a second behind Nordengen to take third place and claim the national title as the leading New Zealander female in the event.

Congratulations to all swimmers who took part in the NZ Open Water Championships – another race well done!