The open water swimming world is abuzz with the news that Diana Nyad has completed her epic marathon swim from Cuba to Key West on the coast of Florida today.

The 64 year old endurance marathon open water swimmer completed the swim, covering 110 miles (approximately 177 kms) in just over 53 hours, and made history as the first person to complete the swim without a shark cage.

“I always thought she could do it given her internal energy, her mental and physical strength, her will of iron,” said Diaz Escrich, whom Nyad has described as a longtime friend.

“More than the athletic feat, she wants to send a message of peace, love, friendship and happiness … between the people of the United States and Cuba,” he said.

Nyad swam up to the beach just before 2 p.m. EDT, about 53 hours after starting her journey from Havana on Saturday. As she approached, spectators waded into waist-high water and surrounded her, taking pictures and cheering her on.

In an inspiration to Baby Boomers around the globe, her face sunburned and lips swollen, with barely enough energy to speak, Nyad waded ashore at Key West after the 53-hour swim and delivered a simple message to onlookers:

“I have three messages. One is, we should never, ever give up. Two is, you’re never too old to chase your dream. Three is, it looks like a solitary sport, but it is a team,” she said on the beach. 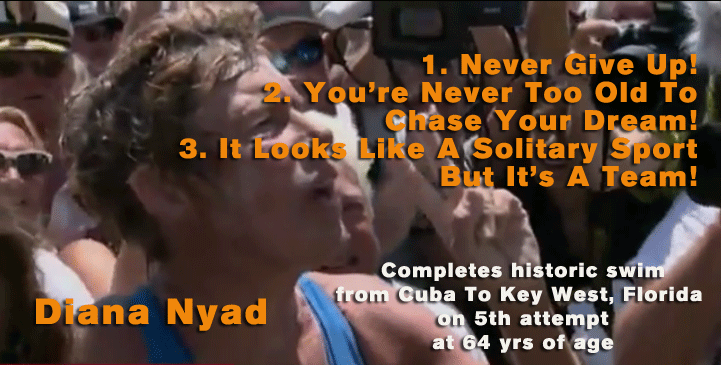 What is your dream? I hope Diana Nyad’s feat will both motivate and inspire you to chase YOUR dream!