A huge congratulations to Diana Nyad and her team – making history as the first person to swim from Cuba to Florida without a shark cage in a marathon 110 mile open water swim in 53 hours. Photo by Nyad Xtreme Dream 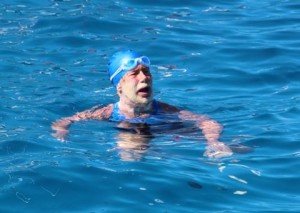 Two miles from the shore, endurance swimmer Diana Nyad stops to thank her team. Photo by Nyad Xtreme Dream.
Just before 11 am on Monday morning, despite exhaustion, a swollen tongue and lips and bad abrasions from her jellyfish mask, 64-year-old endurance athlete Diana Nyad tread water for several minutes to thank her crew of five boats from the water.
After nearly 50 hours and more than 100 miles of swimming, Nyad was a mere two miles from reaching the Florida Coast.
If she reaches Key West, she’ll be the first to complete the 103-mile Cuba-to-Florida swim without a shark cage.
We’ve covered Diana Nyad’s swims extensively in the past and the strains such a swim places on the human body: extreme exhaustion, dangerous jellyfish stings, sunburn, hypothermia, storms and strained muscles, to name just a few.
Last year, after an unsuccessful fourth attempt, Margaret Warner talked to her from her return boat home. You can see the interview here:
In August 2012, Nyad spoke with NewsHour correspondent Margaret Warner about her fourth attempt at swimming the distance between Cuba and Florida.
And here’s more on the throngs of jellyfish she’s encountered along the way and the extensive efforts by her team to protect against them.
This tweet came through at 11:45 a.m. ET.