This year’s Global Open Water Swimming Conference has proved to be a huge success with an inspiring line up of guest speakers who have made fantastic contributions to the sport, along with many open water swimming enthusiasts. 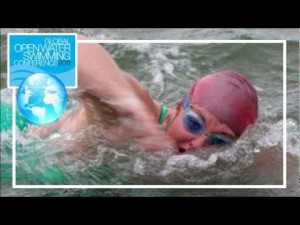 THE 2012 Global Open Water Swimming Conference took over Long Beach this past weekend on Sept. 21-23, and welcomed inspirational and accomplished swimmers from all around the world. The jam-packed, three-day event included everything from awards ceremonies to book signings to educational presentations. Of course, no open water event would be complete without a race, which took part on Sunday morning.

The event kicked off on Friday evening when the attendees climbed aboard the RMS Queen Mary, one of the most famous ocean liners in the world, and were pleasantly greeted with a welcome reception and various book signings.

The day also included a vast range of notable speakers. FINIS Athlete, Trent Grimsey, spoke live via Skype to tell his stories of training for his English Channel crossing and open water races. Grimsey recently broke the world record for the fastest English Channel crossing with a time of 6 hours, 55 minutes. FINIS ambassador, Diana Nyad, who recently attempted the feat of swimming from Cuba to Florida, shared her great passion for open water swimming. Another speaker, Greta Anderson, talked to the crowd and told some unconventional stories. Anderson won a gold medal in the 100-meter freestyle and silver in the 4 x 100 meter freestyle relay in the 1948 Olympics; however, after the Games, she turned to marathon swimming and broke 18 world marathon records. Anderson was also the first person to swim the Santa Catalina Channel both ways nonstop, and was the first woman to complete five English Channel crossings. Another highlight to the speaking agenda was Craig Dietz (Photo on Right). Dietz was born without arms or legs and is a true icon, not just to swimmers. He does not limit himself because his disability, and instead, competes in races and participated in the Sunday swim. He completed his longest race to date and finished the 5km.

On Sunday, swimmers donned their cap and goggles for to race in a distance of 100 meters, 800 meters, 1.5 km, 5km, or 10km in Marine Stadium in Long Beach. This gorgeous venue was the setting for rowing in the 1932 Los Angeles Olympic Games. The Stadium created a perfect racing atmosphere for athletes of all abilities as it controlled many environmental barriers that tend to deter swimmers from the open waters, such as ocean swells, winds and marine life. What made this race even more special for participants was the replicated course for the 10km swim in the 2012 London Olympic Games. As a United States Masters Swimming sanctioned event, all proceeds were donated to benefit the MemorialCare Todd Cancer Institute. Many of the honored swimmers also jumped in the 70-degree water to participate.

FINIS had the honor to be invited to the event with such a broad range of athletes. FINIS President, John Mix, and Industrial Designer, Luane Rowe attended the conference and joined in the race festivities. “The conference was filled with amazing, selfless people from around the world,” said Mix. “Their credentials seem to amass to a Mount Everest assent. Steve Munatones is a maverick for developing an event of this caliber to support the growing sport and by providing a unique outreach to local communities.”

The successful event put participants, speakers and award winners on an open-water-cloud-nine. It is rare to have such great swimmers in one place who share a common goal of getting in the water to swim. Events like this are the reason why FINIS does what they do. With the vision to motivate every person in the world to swim better, swim often and train smarter, FINIS praises the success of the Global Open Water Swimming Conference and cannot wait for the next one.

The above article is a press release submitted to Swimming World Magazine. It has been posted in its entirety without editing.

The Global Open Water Swimming Conference for 2012 was a huge success, and participants will be looking forward with much anticipation to next year’s event.