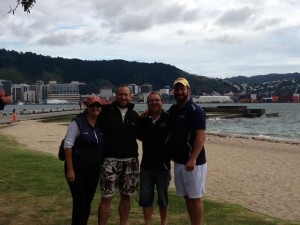 Please Note: I’m writing to you from Wellington, New Zealand… where I’m assisting as support / handler for two American swimmers, Darren Miller and Craig Lenning in their Cook Strait crossing…

of course depending on Mother Nature!

How do you feel?

Things going the way you thought, planned or dare I say…. hoped?

Maybe I am a few weeks late with this, but none the less here we go. Things you should make sure you don’t forget as you strive to reach your potential in 2013 and achieve your triathlon goals…

Especially if you’re competing at the upcoming ½ Ironman Busso on 10th May!!!!

It’s by no means a complete list. Just a little reminder. But hopefully also a prompt for you to think about some other things you shouldn’t forget today, tomorrow and throughout all of 2013.

1. Failure Is Part Of The Pursuit Of Success

Somewhere in the journey, and probably when you least expect it. Bam. Things* will be turned on their head.

But this will happen and more importantly, it’s OK.

Understand, learn, reposition yourself and your approach and off you go again. Simply better educated and skilled for the experience.

Ask yourself “Where do I need to reposition myself at the start of the Open Water swim to ensure that you learn from past failures on the start line?”

I don’t know how many times I have to pull individuals up on this one. Fun isn’t a goal. Fun is a bi-product and consequence from the pursuit of meaningful, purposeful, and important plans, thinking and actions.

And even then, sometimes the process isn’t a whole lot of fun. But hopefully, the learning and the accomplishment will be. And then it may be you will agree that Open Water is …fun!

Ask yourself “What is the purpose of being better at the Open Water Swim in your triathlon? What are your benefits?”

3. Indecision Is The Theft Of Opportunity

Question, learn, probe, understand. Do whatever you have to do, so as to make sure that the momentum of 2013 isn’t stifled by your lack of ability/knowledge/desire/preparedness to make decisions.

As the headline states, the more you sit in a state of inertia, the greater the chance you will miss any number or type of opportunity. You snooze you lose!

Ask yourself “How can I prepare myself better (due to my lack of indecision) to get out of bed and get INTO the Open Water on Open Water Tuesdays?”

4. Just Because You Don’t Like To Do Something Doesn’t Mean You Shouldn’t Do It

Call it discipline, commitment, focus, determination. Call it whatever fits your need. But understand that the chances are that somewhere in the pursuit of YOUR definition of success, you are going to have to do things that you absolutely detest. Get over your selectivity and get on with it. Yes that means get OUT OF the chlorinated pool and get INTO the Open Water!

Ask yourself “How can I turn my love-hate relationship around for Open Water? What one thing can I do today? Where is that Open Water squad Shelley said to show up next Tuesday morning?”

5. Don’t Make Decisions At The Highest Point Of Emotion Or The Lowest Point Of Motivation

Believe me when I say to you that if you do, chances are that you will regret it.

Look, I don’t want you to live in the world where your emotions are continuously averaged out. I do want you to be happy, excited and without wishing you unnecessary pain.  I also believe it is important that you experience the other end of the emotional scale as well.

It’s just that I don’t want you to make decisions when you are at the two extremes of the emotional scale.

Ask yourself “But what is the important stuff?

A great question, but one that only you can answer. However, I did try and help you recognise some of the important stuff by putting the following suggestions forward:

1. Failure is part of the pursuit of success
2. Fun isn’t a goal
3. Indecision is the theft of opportunity
4. Just because you don’t like to do something doesn’t mean you shouldn’t do it
5. Don’t make decisions at the highest point of emotion or the lowest point of motivation

But, to help keep the ball rolling and to appease a number of you who emailed me to say can I add a few more ideas to the list, here are a couple more areas You Don’t Want To Forget:

Hopefully through your education, both formal and informal there is stuff you know. Fantastic. But for me that is only the start.

Knowing stuff is good but basically useless unless you know how to apply it. That is where the intellect comes in. You know it and you know how to use it. Once again fantastic.

But if you don’t actually do anything with what you know, then once again knowledge and intellect are useless.

So going forward; Know your stuff, know how to use it and make sure you do.

Ask yourself “Name one drill or skill that Shelley has taught me at Open Water Tuesdays, Stroke Correction Wednesdays and/or Open Water Skills Clinics… that I am not practicing enough… still?”

7. Learn From Your Mistakes

If you never make any mistakes what does this do to your learning opportunities? Fear of failure is still the most prevalent form of motivation.

But it is also the single biggest influence in holding people back. In some cases they don’t even start because they don’t want to fail.

Everybody makes mistakes. Everybody has those moments when stuff doesn’t work out the way it was planned.

You, my dear Open Water Swimming Mastery subscriber, will be no different, unless of course you are so careful in your standards and your approach that you never make any mistakes. And then the chances are you will probably never see your potential realised either.

Ask yourself “What Open Water Swim did I believe I failed miserably. Swallow that pill. Next list the skills or section you need to learn from in that failed Open Water Swim.

8. How You Feel Doesn’t Matter

Chances are that when the time comes to step up and get the job done, your body, mind or belief probably won’t really feel like it’s time to go.

Bad luck. Just get on with it.

I know that sounds harsh but the reality is that at these sort of times nothing is ever as good as it seems or as bad as it feels.

So rather than worrying about why you don’t feel right just say to yourself “It’s time to get up, get over it and get on with it!”

9. The Right You Works Every Time

The problems, the roadblocks, the mistakes, the failure will be more about you than about anything else.

So when things don’t go the way you want rather than look out the window and say if the wind blew from a different direction, if the sun, the moon and the stars were in alignment, you would not be having any of these setbacks.

Get into the right mindset that works and use it to realise that when things don’t go the way you want, chances are there is a lot of you in the reason why.

Ask yourself “What right me will ensure a successful and enjoyable Open Water Swim?”

If you take pride in who you are, what you do and how you do it; and I mean true pride, then you will push yourself to a higher standard.

Ask yourself “Who am I when I am at my best?”

And when you create, own and be engaged by what you feel will be right …

And when that happens watch as…

You transform your potential into your Champion performance on race day!

Cheers to Your Success