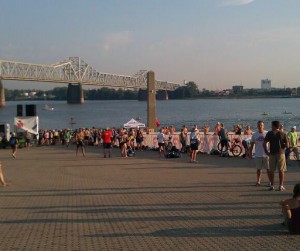 Dozens and dozens of swimmers took a brave swim on a cold Sunday morning where it was a chilly 46 degrees. They dive head first into78 degree Ohio River in the 5th Annual Great Ohio River Swim.

A Swim To Make A Point

Not only did they battle temperatures, they were fighting the perception that the Ohio River is dirty and not safe for recreation.

Organizer Brewster Rhoads said the water quality, as tested by ORSANCO, is showed E.coli counts in single digits (less than 10). The threshold for swimming in the Ohio is a count of 240 per 100 mL, said Rhoads.

Originally scheduled for July 21, the Swim had to be rescheduled due to river conditions.

The annual swim has grown into the largest open water swimming event on the Ohio River. Organizers said over 350 people ages 10-85 have completed the Swim over the past four years.  Sunday morning, one participant, a 68-year-old woman, was doing the swim for the first time.

The Ohio was closed to barge and power boat traffic by order of the U.S. Coast Guard from 7:50 am until all swimmers completed the course, just after 9 a.m.

For More Details and To Watch The Video – Click Here

It had been great to know that people are so passionate in defending the natural beauty of the Ohio River.